The russian war in the caucasus against the Chechen People did not end.
The killing continues, now the city of Grosny vanishes...
brutality kills a whole people...
I think our integrity is to be measured by cruelties like these. We must say NO

Two declarations against this war:

Open Letter of the russian PEN-Club, December 99
in russian language

Open Letter to the Government of the Federal Republic of Germany in german language. 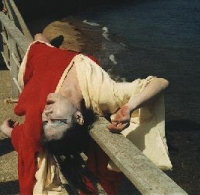 The the portrait of the Butoh-Dancer Tadashi Endo needed an Update. So I redesigned the pages as well

You will find information on his actual repertoire, festival-programs, his portrait and a report on a very intensive performance on the red rock of Helgoland 1998.

More and more, armenian culture takes me, I am more struck by the spirituality and the depth of this culture. That's why I started with the Armenian Pages at Avantart, which similar to the Tuva-Pages, introduce armenian music, art and literature

Read a poem by Egishe Charents, learn about the music of Komitas,or the touching music of Avet Terterian... The armenian culture is an european culture, very close to us, but also very far in her intensity and concentration ....

It's six years now, 1994, that an interesting festival took place in the Hamburg Ethnographic Museum, organised by Heinz-Erich Gödecke.

The aim of this Festival was the meeting of authentic and free improvised music.
That was the first time that I heard Xu Feng Xia and I was fascinated by her power, the energy and tenderness of her playing.
Such a meeting can be a musical confrontation also or a trial of strength, and the other musicians were easy game for Xu Feng Xia.

I am very pleased to introduce Xu Feng Xia here at Avantart. There are two Audio-files as wel!

Sainkho asked me to publish a letter to her friends.